A Question of Balance

The State of California is broke. If you think you might have an idea how to fix this, you can try your hand at the LA Times’ “State budget balancer” game. Just move the red bar – the “Deficit Meter” – as far down as possible! Try balancing the budget without increasing taxes though, because otherwise you might as well get “I DO NOT WANT YOUR VOTE AND BTW I AM A PEDOPHILE” tattooed on your forehead. Good luck.

Click on the picture to see my own suggestion in detail. (I hope nobody actually follows it though, because my plan depends heavily on raising the gasoline tax and we just bought this). 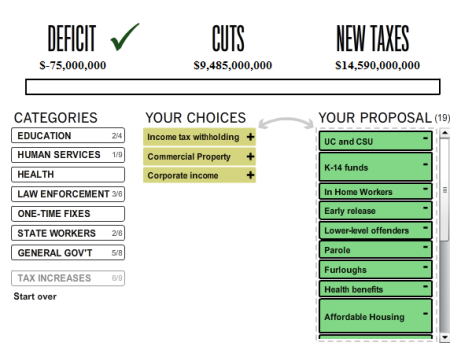 But let’s focus on good news instead! California still had a generous $853,000 to spare for a new, state-of-the-art execution chamber in San Quentin prison that will probably never be used because of the moratorium on executions that has been in effect here since 2006. How unfortunate, since the new execution experience sounds so much more dignified than the old one:

“One major improvement in the new facility is that it has been wired with speakers. The condemned prisoner will be able to broadcast his last words by a wireless microphone held to his lips by one of the executioners.” (sfgate.com)